Work > The Darkness of Me and Him

The Darkness of Me and Him Midsumma Festival Visual Arts Project

In a dark gallery space, Ashlee Laing has concealed eight lights in metal sheaths, and hung them above and spotlit eight stained bed pillows embroidered with text in English and Korean about himself and a Korean man, their separation, sleeping arrangements, rules and boundaries. He has added to the pillows, where washing instructions or labels might otherwise be, slogans and labels for queer men in both cultures. He has set the pillows on plinths, lacquered in the style of contemporary, generic Asian homewares, seven in black, one in red, each in a pool of rising and falling light. The light levels are programmed to change like natural light in a sleeping room, in a theatrical scene, or a sauna cubicle.

These men’s story is told in signs varied and repeated across the space. If you want to follow their story, you have to follow the changing pattern of light which illuminates a plinth and its statements in sequence. The installation has a rhythm of poetry, and its formality and stillness are elements of ritual and artistic practice from both cultures.

Laing recently spent two and a half years living in two South Korean cities. Out of this experience, the Darkness of Me and Him was created. In many Korean cities, including the ones he lived in, there is an emerging Korean-Western style gay or queer culture with many of the now standard features such cultures exhibit worldwide: bars, saunas, queer rights organisations, media, festivals, cyberspace and various models and practices of everyday life, identity and relationships.

In Western terms, Korean culture and Korean-Western queer culture in these cities are sometimes characterised as ‘conservative’, meaning that from a Western perspective they are on the one hand oppressive or homophobic, and on the other, responding to and shaped by violence, censure, indifference and other hostile forces and institutions. They show some of the same characteristics that a Western city’s culture might have in the early days following the rise of the gay liberation movement in the 1960s.

Gay travel internet sites document through Western eyes, the sometimes bruising encounters between these cultures and their effects on individuals – confounded expectations, pain, frustration, internal damage and constraint; and resignation and contentment from those who, somehow, have fashioned an apparently more positive ways of living. These accounts are somewhat one-sided, and their explicit assumption is that Western queer cultural values, the filter through which the encounters are invariably viewed, is a universal good.

Although it is developed from a similar cultural territory, Laing’s installation has a different reckoning and mood. Here is a space for shared symbols and metaphors, a place for expression, exchange and sensuality; but also, of necessity, a space of darkness, with occasional spots of light. It conceals as much as it reveals; and what it reveals, is revealed only for a time, then concealed again. Is this darkness our old friend? Or is it, as the Western view has it, something to be transformed to produce enlightenment, to sustain everyday life, or indeed to make art. Leigh Raymond 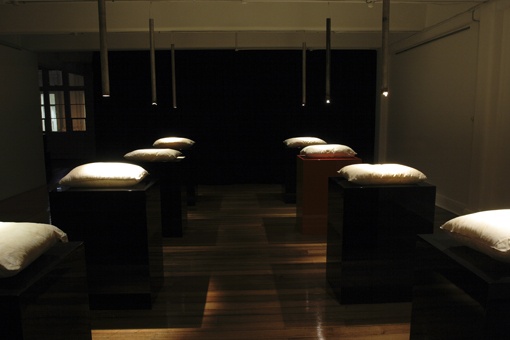 The Darkness of Me & Him
Pillow, lacquer-treated MDF, metal pipes, Halogen light & embroidery 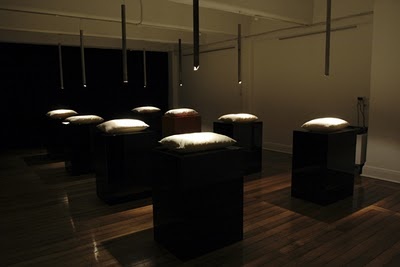 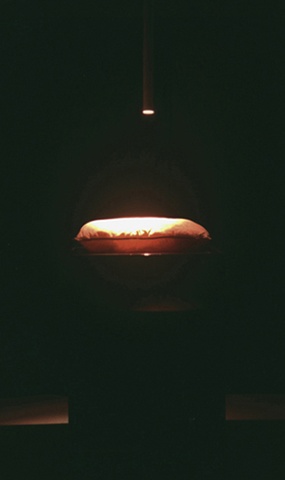 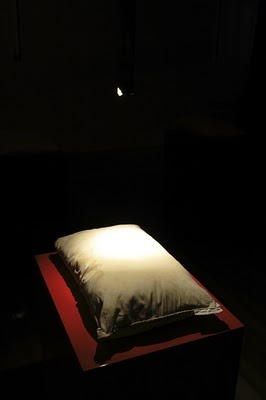 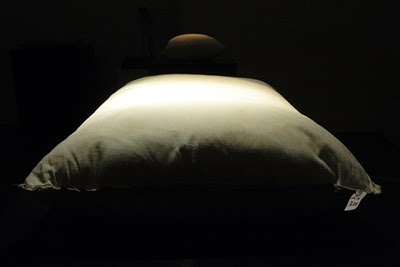 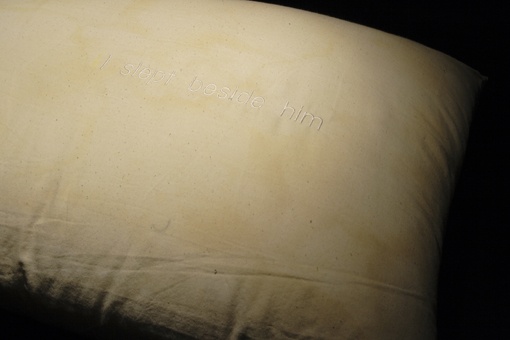 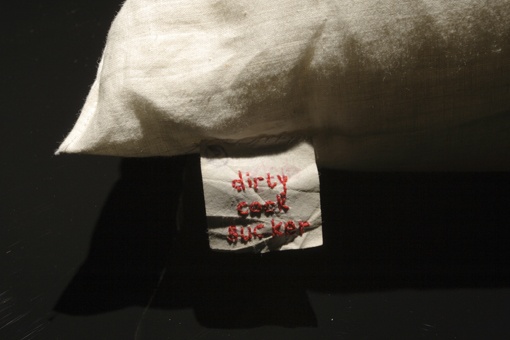 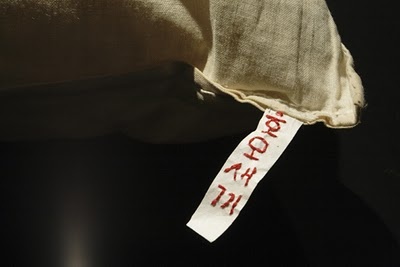